My tryst with wild balsams began in the late 1990s when a young botanist took me to the western Upper Nilgiris to view the flowering spectacle that unfolds in September. I was fascinated by the shape and colors of these balsams (the genus Impatiens) and the fact that many were endemic to just a few hillsides and were seen nowhere else on planet earth. As I learned more about these plants, I also realized that very little had been documented about many of these species since their Types were collected by the British many decades earlier. 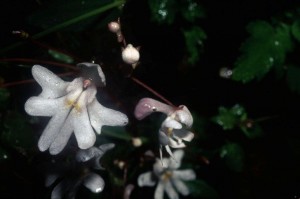 Later, we began to carry out annual botanical expeditions into the western edges of the Nilgiris plateau. In 2006, we were honored to have with us Dr. Michael Tobias, the President of DSF, on a three-day trip. On that hike, he also saw an unidentified balsam that would later be described as a new species – Impatiens taihmushkulni, since it was found growing on the slopes of Mount Taihmushkuln, from where the Toda (the indigenous people of the Upper Nilgiris) God Aihhn rules the afterworld, Amunawdr.

On another journey, we saw a balsam that identified with Impatiens lawsoni. Further studies established that it was actually distinct and went on to be described as Imaptiens kawttyana, after the Toda deity who is believed to reside in the hill Kawtty.

A third balsam looked like Impatiens nilgirica, but we soon realized that it had several distinct morphological characteristics. Even the microscopic analysis of its minute seeds revealed it to be unique. This was named Impatiens nilgirica var. nawttyana after the Toda epithet for the genus Impatiens, viz.  nawtty. All three new balsams were recently described in the Nordic Journal of Botany (Dec. 2016) by Tarun Chhabra and Ramneek Singh, the former a practicing dentist, and the latter a tea planter by profession. Both are the founding trustees of the Edhkwehlynawd Botanical Refuge (EBR) that is striving to restore degraded habitats in the Nilgiris, along with several other Toda-related activities.

Friends who would like to contribute towards these activities could do so via the Dancing Star Foundation. Tarun is also the author of The Toda Landscape – Explorations in Cultural Ecology (2015 Harvard University Press, Harvard Oriental Series, volume 79).